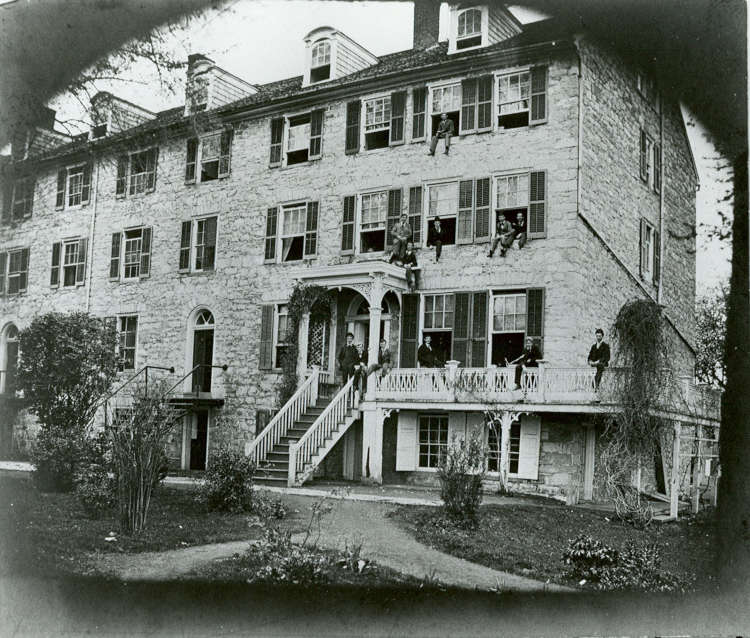 Benjamin Rush, a prominent early American physician and Founding Father, believed strongly in the principles of freedom, achievement, and education. These ideals inspired him to charter Dickinson College, now a fixture in downtown Carlisle, in 1783. The founding of Dickinson occurred only six days after the signing of the Treaty of Paris, which ended the American Revolution and officially severed the United States’ connection with Great Britain. The chartering of Dickinson therefore made it the first college to be established in the newly independent United States.

In its earliest decades, Dickinson College faced a series of threatening obstacles. In 1803, West College burned to the ground in the midst of a snowstorm. With the help of architect Benjamin Latrobe, who also designed the U.S. Capitol, the building was rebuilt and hosted its first classes in 1805. A few decades later (between 1816 and 1821, and again in 1832), following financial troubles and faculty disputes, the College temporarily closed. Finally, in 1863, East College briefly served as a Confederate hospital during the Battle of Carlisle.

Despite these setbacks, Dickinson has continued to thrive and attract students from far and wide. Notable alumni include President James Buchanan, Governor Andrew Gregg Curtin, two Supreme Court Justices, and the first curator at the Smithsonian Institution. With its emphasis on the liberal arts and building international connections, Dickinson College still embodies Rush’s vision of a rigorous, enlightened, and engaged institution.

Behind the Seams: Conserving an 1840 Wedding Dress