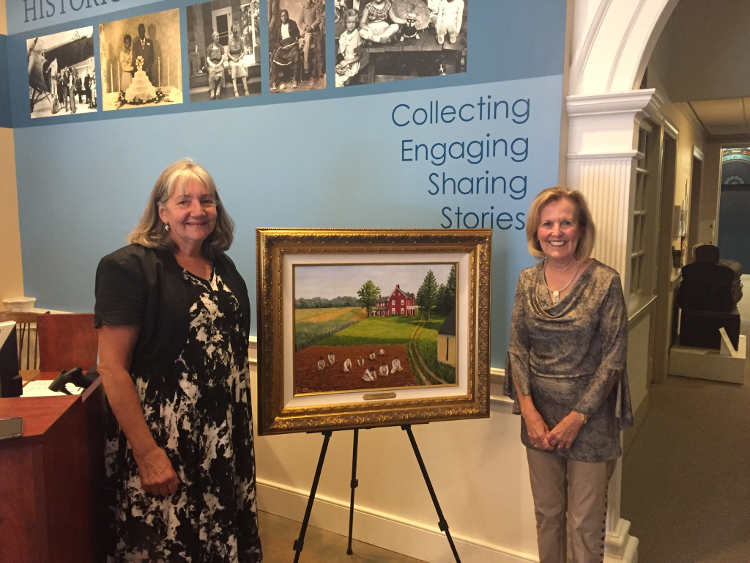 This donation to the Farmhouse Coalition will be auctioned as a fundraiser during the 2018 Carlisle Journeys Conference to support the efforts of a group of CIIS descendants who plan to restore the farmhouse building as an interpretive center of the Indian School.

“N. Scott Momaday, who was present at the “Farmhouse Roundtable Discussion,” told conference delegates that for him, the Carlisle Indian School is as important in American history as the battlefields of Gettysburg:  it is a sacred place.  General Joshua Lawrence Chamberlain once said of Gettysburg:  “Forms change and pass; bodies disappear; but spirits linger, to consecrate ground for the vision-place of souls.  And reverent men and women from afar, and generations that know us not and that we know not of, heart-drawn to see where and by whom great things were suffered and done for them, shall come to this deathless field to ponder and dream; and lo! the shadow of a mighty presence shall wrap them in its bosom, and the power of the vision pass into their souls.”  The “spirit of place” is strong within and surrounding the Carlisle Indian School Farmhouse.  Indeed, spirits linger, consecrating its ground.”

“You may recognize some of the Lingering Spirits in the painting from the circa 1902 black and white photo of the small boys working on the school farm planting onions.  I also recalled reading that some of the Native American boys were involved in building the yellow barn there of which they were so proud.  So I felt it only appropriate to include at least a glimpse of a yellow barn.  It was a privilege for me to set up my easel next to the existing Farmhouse to capture how the light shines on it at different times of day.  It is, indeed, a special place!” (Joan Vandaveer in email to Farmhouse Coalition members).