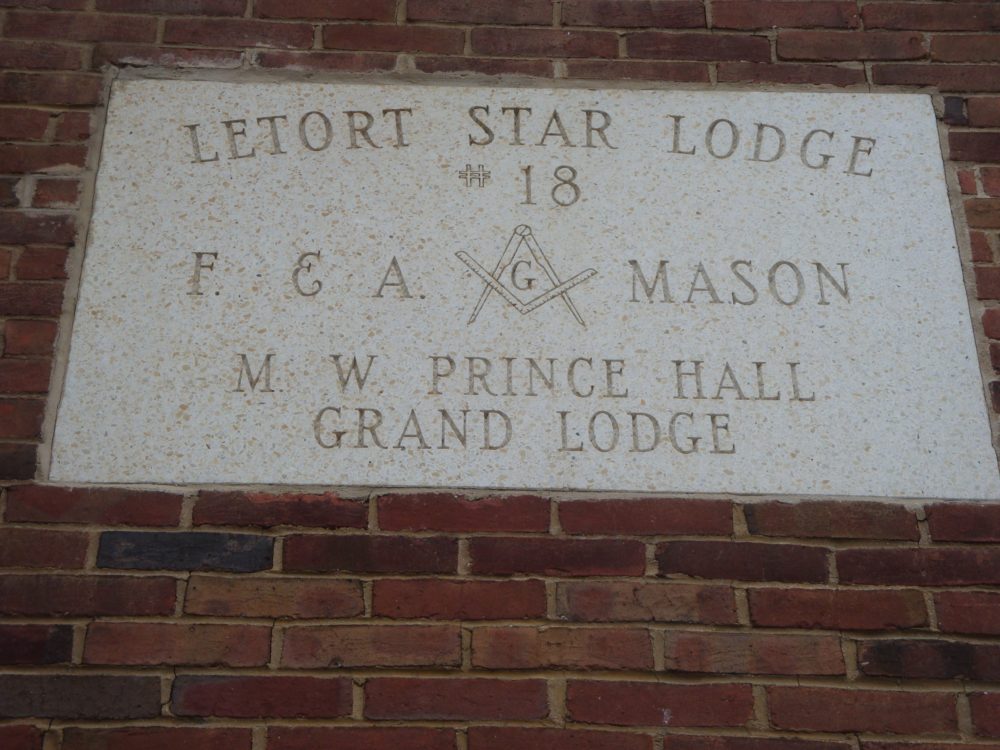 Formal recognition of placement of the Letort Star Masonic Lodge on the Cumberland County Register of Historic Places was made on Thursday July 6, 2017 at a regular meeting of the Lodge. At that time, Jason Illari, Executive Director of the Cumberland County Historical Society, presented the official brass plaque recognizing the historic building which was built c. 1885.

The Letort Star Masonic Lodge on North St. in Carlisle is built on two lots originally owned by Cyrus Richardson as early as 1835. An African American one-story church existed on the site until the current two-story building was built. That building, originally the North Street Hall served the local community.

In the first half of the 20th Century, the building was acquired by the African Methodist Episcopal (AME) Church. The church added the front portion of the building including a new front entrance, stained glass windows and a crenellated tower. In 1951, the AME Church sold the building to the Masonic Lodge. The church moved to South West Street. The Masonic Lodge had been meeting at other sites in Carlisle prior to moving to its current location.

The original two-story hipped roof building had three bays on the front and four bays on the west side. The second floor bays on the front contained three double hung windows. The bays on the first floor included a door on the left, likely a window in the center and double doors on the right, although the entrance door to the first floor could have been in the center with a window on the right. Evidence of the three front second floor windows remain. The one on the right (as you look at the front of the building) exists in its entirety behind paneling in the lodge hall. Half of each of the other two survive above the first floor brick addition which has a shed roof extending from the middle of each of the windows. The windows have stained glass which likely survives from the church era.

The exterior of the new addition has three stained glass windows in the tower. The top of the tower has four brick peaks (crenellations) and has a flat roof. The first floor portion of the building has a shed roof. The brick used in the addition is slightly lighter in color than the original building and is running bond with the exception of two decorative brick panels and the large Masonic Lodge sign in the middle. The original building has common bond brick styling and is consistent with many 19th century buildings.

On the interior, all of the original windows on the west side are intact and are covered with draperies. On the exterior all of the windows are either bricked in or covered with plywood. No natural light enters either floor of the lodge hall on the second floor or the community room on the first floor.