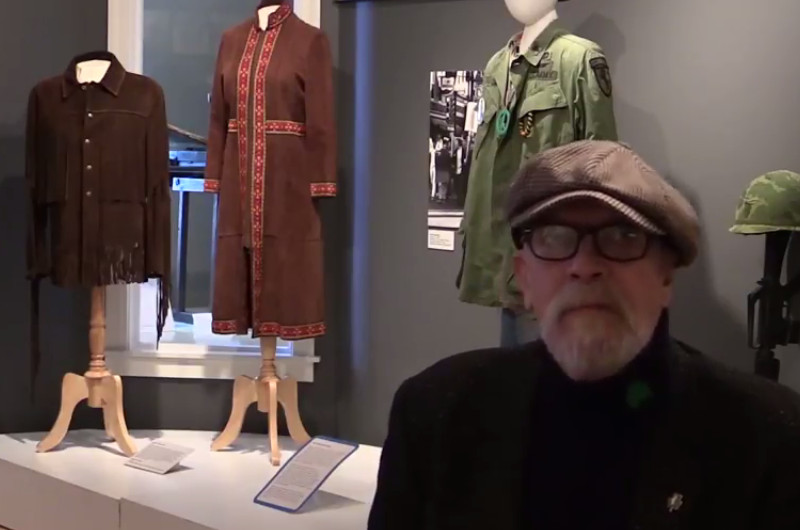 The Cumberland County Historical Society presents a short interview with Mickey Collins focusing on his volunteer experience at the museum here at CCHS from Civil War drums and World War I nurse uniforms to curating and researching exhibits.

Mickey Collins: I celebrated my third anniversary on August the 13, 2016.

BW: Great. What made you interested in volunteering here?

MC: Well, prior to me coming here I was working as an educator and developer with the Army Heritage and Education Center which is right down the road at the War College. I had started with them at the ground breaking of the facility and had that job which was a paying position for eight years prior to losing it because of part-time and seasonal under the Obama budget cuts. I was kind of floundering around and a friend whose the business manager at the Salvation Army, an Irish lass, named Maureen Marr had suggested I go back into nursing. But after 35 years as a critical care nurse in inner city hospitals in Baltimore that wasn’t an option anymore. So she suggested I come over here. I thought great, because I had walked in here and I was quite impressed. I called and made an appointment and met with our curator and assistant curator. I think we all knew within five minutes it was gonna be a good deal. Since that time I have pretty much exclusively worked with the museum staff. Peggy, Rachael, and Mary.

BW: Could you describe to me what you do with the museum staff.

MC: I started off basically doing research in the library for the projects the museum was putting together. Then one day, Rachael asked me to do a Window to History. Which you know we have eight of them, changing exhibits. And I thought okay and I decided to do it on the Gobin Guard which is the Spanish-American War period. And anything they did not have I had in my collections. So it turned out to be a pretty nice window. The next thing she asked me to do was to totally redo our military section. And I did, and everyone liked that. Since then, I’ve primarily do exhibits, research for major projects such as the 60s one I’m sitting in the middle of right now, and I help Mary March our collections manager with inventory, identification, and that sort of thing.

MC: Yes, we were given the task, well Mary was given the task and I’m kind of like her sidekick, of finding ten items within 10,000 plus in our collections for conservation. And we went through and a Civil War drum caught my eye. I noticed the calf’s head skin on the top of the drum was peeled back and I took a pen light and I could read in there that it was a Vogt Contract Drum from 1864 made in Philadelphia. I think they only made a 1,000 of them. Might be 10,000. I’m not sure at this point. I did research and found similar drums of the same contract, the same maker on display in the Smithsonian and in the Metropolitan Museum of Art in their musical instruments. So that became our foremost to get conserved and restored and put back together again. It took a little over year but we got it back and it looks fantastic. Sitting right down stairs as you know in our lobby on display.

The second item, when I was redoing the military case. I got into our World War I collection. And found a pretty rare World War I Army Nurses Walking Out uniform. It’s a beautiful blue wool broadcloth. It’s all tailor made. She was a young slim lady. Her name Elizabeth Rathburn. She worked out at Hospital 31 which was the old Carlisle Indian Industrial School but they changed it the Army Medical School Hospital Barracks. As I moving her uniform about and as I was placing it on the mannequin. This thing is quite a complicated clothing item to put on. It has hooks, eyes, snaps, buttons. It’s like you need ten people to help you get dressed. But I noticed a lot of the buttons and hooks and eyes and so forth and some minor areas that need some attention. Rachael knowing that I restored some antique military uniforms, did a lot of hand sowing, said okay. I showed her I had the proper thread of the period. The same thing they would have used. So one afternoon I sat in the office while they were on their computers and played seamstress to this uniform. And it just thrilled me to death.

BW: Do you have any other interesting stories?

MC: Here, this whole place is one big treasure hunt. You know. There is not a day goes by that I don’t find something that I hadn’t seen before or is just super interesting or that we want to do more research on. Mary and I worked on solving riddles this morning. Had a bunch of stuff that been misidentified in our server PastPerfect. And we went through solving this. We’ve done that with a lot of things. Identifying misidentified items. Just what the heck it is and where did it come from. It’s a good mystery novel onto itself.

BW: Great, well I know you’ve been a great help to me too, with the Gardner Library Project. So thank you so much for your time here.

MC: All right. Well you’re more than welcome. Send me some of those video interviews.