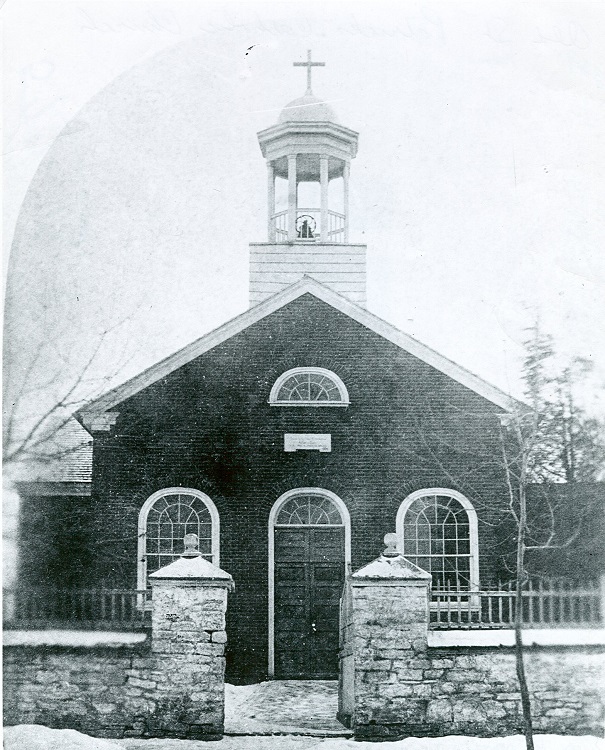 In the Saint Patrick Church archives is a document dated June 29, 1868 between members of the church, John Faller, Wm. Mulgrew and Joseph Sites, and a local painter, William Elmer.  It is an agreement to paint the church that was used before its demolition  in 1892 to make way for the present day Shrine Church on Pomfret Street.  The agreement gives a glimpse into the past of a building that no longer exists and helps us to visualize how the inside looked in the earlier church.  It also prompted me to do a bit of research on the painter.

William A. Elmer is described in his obituary as “Carlisle’s talented painter.”  Born in Germany in 1833, William came to America as a young man to New York, then Philadelphia, Harrisburg and finally Carlisle in 1854.  He worked principally at house painting, but it was not his trade.  He was a talented artist that was a graduate of the Berlin School of Art.  His obituary also mentioned that he was “the leading frescoer in the valley and his services were in great demand.”  He was a member of St. Paul’s Lutheran Church and a member of the Carlisle band.  He was a “splendid” musician and a baritone player of “great ability.”

What caught my eye in Newspapers.com was an article “Badly Injured By A Fall” dated August 14, 1868 about Mr. Elmer painting the dome of the Catholic church and falling 60 feet from the scaffolding.  The date being right as he was to be finished with the job as stated in the agreement, “the whole painting to be done in a tasteful and artistic manner and to be finished on or before the 15th of  August 1868.”  The article stated that his injuries were internal and of a very serious nature.  Fortunately, he survived another 43 years, dying in September 1911.  And, according to the agreement, received from the committee on repairs of St. Patrick’s Church, “the balance in full of all my demands against said church, $255.00.  The transcription of the agreement is as follows:

This agreement made the 29th day of June A.D. 1868 between John Faller, Wm. Mullgrew & Joseph Sites of the first part and Wm. Ellmer painter of the second part witnessed that the said William Ellmer agrees to do the painting and furnish the materials as hereinafter specified, of the Catholic Church of Carlisle in consideration of the sum of money also hereinafter specified.

The work is to be done as follows viz.

The cupola and other outside wood work of said church is to receive three coats of white lead paint or as many as may be necessary to make a neat & substantial job. The crop on the top of the cupola is to be covered in a substantial manner with gold leaf, and the front doors (3 in number) are to be coloured & grained in imitation of black walnut & well varnished.

The walls & ceiling, or such parts of them as may require it are to be filled in with plaster. Such parts of the walls & ceiling as may require it are to receive a coating of oil paint sufficient to exclude moisture. The walls & ceiling are then to be painted ornamentally in distemper colours: The walls are to have columns, arches over the windows and panels between the columns or columns & ribs extending to the center of ceiling with appropriate paneling. The ceiling will correspond in style with the walls and have either square panels or be finished in gothic style with appropriate ornaments wherever they are needed. A place will be set apart for a chandelier about the middle of the ceiling and will have an ornament suitable for that purpose painted upon it. The whole painting to be done in a tastefull & artistic manner and to be finished on or before the 15th of August 1868.

The said Wm. Elmer also agrees to furnish all the necessary materials of the best quality except one hundred pounds of white paint and the gold leaf for the gilding of the crop which articles to the said amt. will be furnished by the said church.

The workmanship and materials are to be subject to the inspection and approval of the pastor of the church Rev. John Cox and of John Faller, Wm. Mullgrew & Joseph Sites, and of such men as they may appoint to examine said workmanship & materials.

And the said John Faller, William Mullgrew & Joseph Sites of Carlisle or either of them agree & promise to pay to the said William Ellmer of Carlisle, on the satisfactory completion of the work as hereinbefore specified, the sum of three hundred and thirty-three dollars.

In testimony of which

Rec’d of the committee on repairs of St. Patrick’s Church two hundred and fifty five dollars the balance in full of all my demands against said church