The Gobin Guard, Carlisle, and World War I 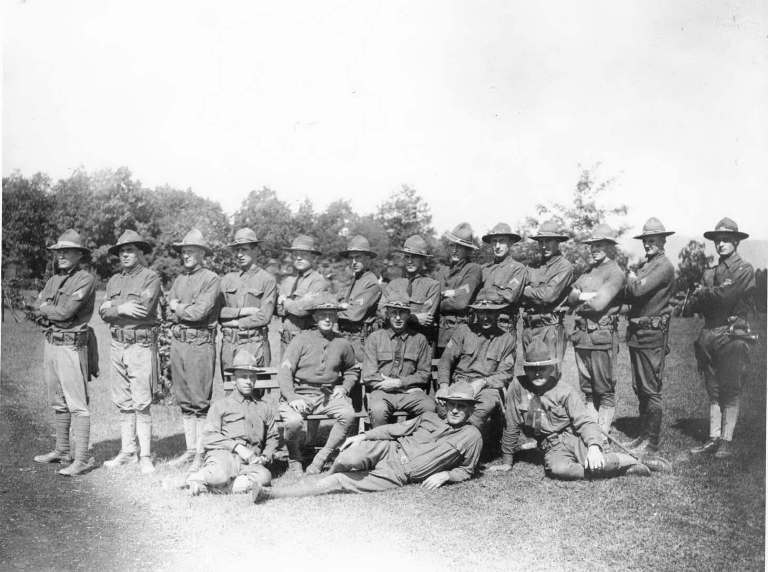 Captain John M. Rudy of Company G, 8th Regiment Infantry, Pennsylvania National Guard, known as the Gobin Guard wrote to the Evening Sentinel 100 years ago on May 10, 1917, of the benefit of joining the local National Guard Company rather than being drafted. For “a man enlisting at this time is assured of the satisfaction of serving with friends and acquaintances, while those who wait for the draft may be assigned to any organization.” Rudy further notes that some are even selecting their bunkmates. An additional benefit was the option to be discharged following the end of the conflict.

Further on in the paper the Sentinel notes in a headline that “ONE BY ONE THEY GO TO THE FRONT.” The article recounts the recent enlistment of local men from the County including some into the Gobin Guard. Included in the story is an account of Gus Welch, of the Carlisle Indian School, as well as a number of men from Dickinson College and the Dickinson Law School entering Officer Training at Fort Niagara.

This was a part of the Evening Sentinel’s ongoing coverage of the War in Europe which America had entered only a month prior. Daily, readers would hear the latest from the front including the victories and setbacks of the British on the Western Front, the German U-boats off the coast of the United States, as well as the American political reaction to the war and sacrifices involved in rationing.

Rudy’s entreaty to the men of Cumberland County may have convinced some to join the Gobin Guard. But there service came at a cost according to George P. Donehoo in his “History of the Cumberland Valley.” The Gobin Guards were sent overseas with the 28th Division of the American Expeditionary Force on May 7, 1917 returning almost two years later on May 1, 1919. Of those who left from Carlisle over 90% had been “killed, wounded, or captured” with fifteen buried in France. Of those who did return home Rudy’s promise of an early discharge was taken by some and they were honorably discharged in May 1919 at Camp Dix, New Jersey.