“I Came to Tiffin, Ohio to Coach the Football Team” 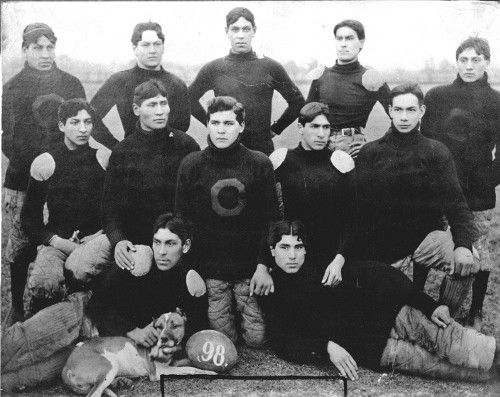 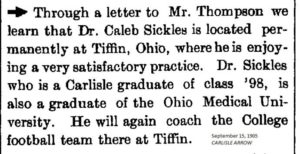 I came across this blurb while searching through the 1905 CARLISLE ARROW newspapers, looking for an answer to a research inquiry I was working on, and this reference caught my eye. My mouth fell open and my eyes began to well up and I thought of my late father, Chuck Kriete, who played football for Heidelberg College in Tiffin, Ohio, in the 1940s when Caleb Sickles may still have had an association with the school. It occurred to me that my dad may have been observed on the gridiron by the former Heidelberg coach who began his career as a football player for the Carlisle Indian School.

Caleb Sickles arrived in Carlisle August 28, 1891 when he was twelve years old. He was enrolled with four Sickles siblings and of the five Sickles children to attend Carlisle, four graduated – an extremely high statistic for those days.  All were members of the Oneida Indian Nation of Wisconsin and two married former Oneida students who had attended Carlisle.  After Caleb’s graduation in 1898, he continued his association with Carlisle as a member of the 1898, 1899 and 1900 football teams. He later became a dentist in Tiffin where he raised his family. Sickles credited football and sports to his successes at the school.  After 1906, he wrote the following to his alma mater:

“I have never lived among the Indians to any extent.  From my own experience I think the pupil who has attended Carlisle should never go back to the reservation to live. If he has holdings I would advise him to sell them, put the money in the bank and seek employment or attend a school and obtain a professional or technical situation. I started to attend Ohio Medical University with $53.00 in my pocket. OF course my football ability helped me as the schools then were seeking men who could play football. I was given employment at the school and in this way was enabled to help myself. I played professional baseball during the summer and earned enough money to pay my expenses during the school year. When I graduated I had nothing but determination  to make a success of my life, I came to Tiffin Ohio to coach the football team. When the season ended I opened up an office.  That was in 1904.” – Caleb Sickles’ student folder, RG 75, File 1327, Folder 5353

At the upcoming October 7-9, 2016 conference, Carlisle Journeys: Celebrating the American Indian Sports Legacy, we’ll explore the tensions between the legacy of assimilation with how sports influenced student experiences at the Carlisle Indian School. Caleb Sickles’ story is one of dozens of athletic stories relevant to the events of those two days. Please visit the website at www.carlislejourneys.org for more information. For me, revisiting the stories of these athletes is bittersweet as I know how football defined my own father’s identity, and I’ll be listening carefully to the stories told by descendants and relatives of the Carlisle students and how their lives were influenced by the amazing Carlisle athletes.