or The Fun Facts You Learn While Working in the Library 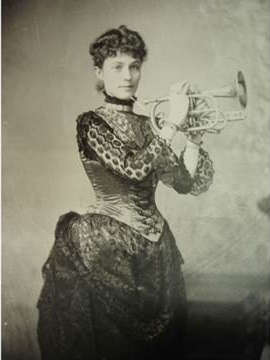 I received a call in the library one day from a woman that wanted the coroner’s report on her great-grandfather,  J.A. Coleman, who died in 1884.  During my research, I discovered that he was the father of the Coleman Sisters and also their manager.  The Coleman Sisters,  Alice and Clara, entertained before large audiences not only in Carlisle, but across the country.  They had a younger sister, Millie that performed with them for a few years.  The woman that requested the research was Millie’s granddaughter.  As I was researching Mr. Coleman, I noticed that we had pictures of Alice and Clara in our photo archives and after talking with our photo curator, I discovered that the Coleman Sisters were mentioned in the book “In Pursuit of Pleasure:  Leisure in Nineteenth Century Cumberland County,” by Clarke Garrett.

Dr. Garrett writes that the commencement of their professional career was in 1870 when the Troupe performed at Rheem’s Hall for three nights.  They danced, sang and played an assortment of musical instruments that included banjo, xylophone, clarinet and cornet. 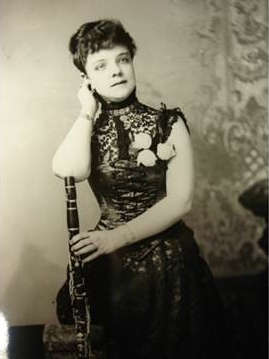 According to the Herald newspaper, the Coleman sisters were “the only theatrical troupe of little folks traveling at the present time” and “the most exquisite character actresses, comediennes, vocalists and clog dancers upon the American stage.”  They toured most of the year returning to Carlisle every couple years to perform.  Alice excelled on the cornet which she and Clara had studied with Lewis Faber, director of the Carlisle Brass Band.  Clara is pictured with her clarinet.  Their travels included Havana, Cuba and Mexico when they joined the Berger Family Company for a year tour in 1877.  In 1879, Clara married James Curtin, an employee of the Indian Industrial School.  Clara was asked by Captain Richard Pratt, the commandant of the Indian School, to organize an Indian Brass Band in 1880.  The band was able to participate in the evening dress parades within three months of starting with their leader, Clara, dressed in a bloomer costume she made herself.  Alice married in 1882.  The Herald announced that “our own famous lady cornetist, one of the finest cornet players in the country, had married Charles Petit.”  In 1899, Alice died of tuberculosis and was buried in Carlisle.  From the Church and Cemetery records in the library, I found that the family has a lot in Ashland Cemetery.