A Place to Lounge and Talk History 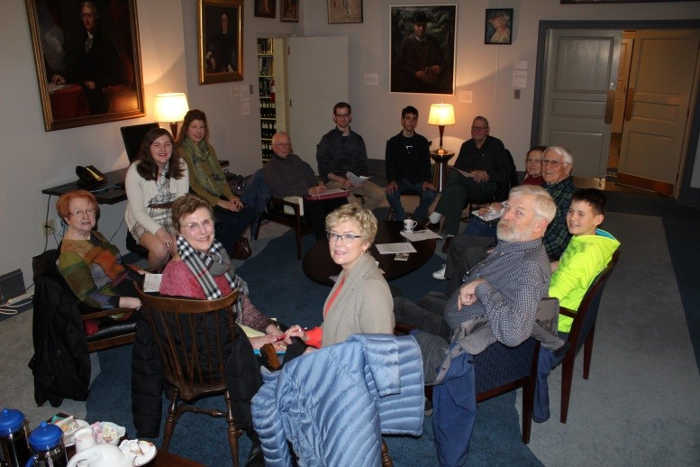 Last year, the room to the left of the main reception desk, and once the original Hamilton Library, was cleared of its cubicles and staff was dispersed around the building to make way for a new History Lounge. The Lounge was formed as a space to hold meetings, talk history, or relax with a cup of coffee.

Taking this idea of a place to chat about history in a causal and relaxing space, I formed the British History Discussion in Fall 2017. Through conversations with volunteers and Dickinson students, I realized there was an interest in learning more about British history. With the creation of this new space, I saw an opportunity to bring together volunteers and staff at CCHS, members of the public, and Dickinson students to read and learn about 16th and 17th century British history (my area of expertise). My goal is not to hold lectures, but rather have people learn about the period through a causal conversation based on readings.

Our first Discussion Group had six members and focused on the Tudor period. We met once a month to discuss pre-assigned readings, such as scholarly articles and primary sources. The group thinks about the period beyond popular culture and stereotypes, to better understand how the Early Modern Period evolved. Based on the group’s feedback, I continued the Discussion Group in January 2018 by expanding into the Stuart period to discussion monarchy and absolutism from James I to Charles II. The group’s attendance has grown to 18 participants, and as the conversations continue the topics of the Discussion Group will change based on the group’s interests in the period.

If you’d like to learn more about the group or be added to the mail list to find out when the next discussion group will meet, contact Lindsay – lvarner@historicalsociety.com.

Behind the Seams: Conserving an 1840 Wedding Dress