Each year CCHS holds its Annual Meeting in October to celebrate accomplishments, present our annual awards to worthy history champions and hear about what’s in store for CCHS moving forward. Our 2021 Annual Meeting will take place on October 26, 2021 9:30am due to restrictions for large gatherings. We will host the gathering via Zoom video conference and a link will be provided for you once we process your registration.

This year we celebrate the following individuals for their outstanding work!

Raised in Carlisle, Pennsylvania, Lisa Brousse attended Slippery Rock State College and received her bachelor’s degree in special and elementary education. From there, she moved to New Orleans to teach and served as a principal. She received her master’s degree in education at the University of New Orleans. Lisa married her husband Bill and they had 4 sons before they moved back to Carlisle. Lisa taught Special Education for the Carlisle School District until she retired. She now volunteers at History on High, the Shop at least once a week. She also does historical research, has given 10 minute talks and gives walking tours for CCHS. She’s a foster parent for Furry Friends, founding member and volunteer at the dog park, a volunteer for the Star Program for Bosler Library and for many years devoted a lot of time to the Red Cross. Lisa and Bill have seven wonderful grandchildren and four dogs of their own. Thank you, Lisa, for all that you do! 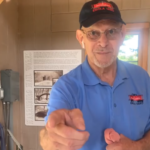 A leading expert on the history of eastern Cumberland County. After a career in railroading at the Enola Yard, he willingly shares his knowledge of the history of Enola and surrounding communities. He is currently the Executive Director of the Historical Society of East Pennsboro. Their efforts led to the preservation of the Enola Miller House. In addition to railroading, he is knowledgeable about the history of the Harrisburg Nailworks, located in West Fairview. Recently he has shared his knowledge through two of the CCHS’ “Ten-Minute Talks.” His talks are some of the most viewed videos on our Facebook page. He has partnered with the CCHS education department to support a multi-facility field trip. He is dedicated to promoting the interesting and unique histories of West Shore communities.

William Foshag Preservation Award:
Friends of the Sheepford Road Bridge
This group of local preservationists, led by Janice Lynx, has worked tirelessly to preserve the bridge between Cumberland and York Counties on Sheepford Road. Janice and the group have worked with both the Cumberland and York County Commissioners to gain their support for the project. They applied for and were granted placement on the Cumberland County Register of Historic Places. A well-planned event was held with media coverage to recognize placement of the bridge on the register. 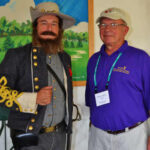 Awarded in special recognition of Paul’s work over the past eight years to lead the Society’s fundraising efforts at the annual Golf Tournament. Paul’s leadership has resulted in more than $150,000 to benefit the work of the society. The tournaments are recognized as one of the best organized golf tournaments in the region. Paul has supported the mission of the society in many ways over the years in addition to the work with the tournament. Most recently he served as Interim Executive Director for six months at the end of 2020 and the beginning of 2021. Thank you, Paul, for your valuable service to the Society.